Britain’s Revolut has announced a new 4.5% “bonus” on top of its base annual interest rates for American savers.

LONDON — As major U.S. banks have been forced to slash interest rates on high-yield savings accounts during the coronavirus pandemic, one financial technology (fintech) challenger is going in the opposite direction.

Britain’s Revolut on Thursday announced a new 4.5% “bonus” on top of its base annual interest rates for American savers. It’s an annualized rate that’s calculated daily and pays out each month. Users subscribed to Revolut’s “Premium” and “Metal” accounts — which cost $10 and $17 a month respectively — will get a 5% rate on their savings, while standard customers are entitled to a 4.75% rate.

The top 5% rate is far higher than the current market-leading 0.83% offered by online bank Vio, according to personal finance website Bankrate, and more than 50 times the 0.09% national average. Notably, Revolut isn’t a typical bank but a so-called e-money institution that’s partnered with a federally-regulated lender, Metropolitan Commercial Bank, which holds customer deposits on its behalf.

But instead of earning interest the traditional way through lending, Revolut says it’ll pay out the 4.5% bonus directly from the revenues it makes on the fees it charges merchants every time a customer uses their card. It’s worth noting that these interchange fees make up the overwhelming bulk — 63% — of Revolut’s income.

“The model is designed to ensure that customers need to use Revolut as a primary spending card to benefit from the full rate,” a Revolut spokesperson told CNBC when quizzed on its seemingly cash-intensive model. “Because interchange is so high in the U.S., we won’t create loss-making customers.”

Revolut’s savings “bonus” still comes with a few caveats though. First, you can’t earn the top 5% rate unless you’re a paying user. Second, you’ll only earn the additional interest on the total amount you’ve spent the previous month — so if you had $400 in your account the month before an interest payment but only spent $100, the 4.5% bonus would only apply to the $100.

Still, personal finance experts say online banks may be a better bet than incumbent for savings returns at the moment. The Federal Reserve has cut interest rates close to zero this year in an effort to prop up an economy ravaged by the Covid-19 crisis.

“‘A little interest’ is all too true for most accounts, which offer low rates, but you can find higher rates at online banks,” writes Margarette Burnette of personal finance site NerdWallet. “These banks don’t have to support expensive brick-and-mortar branches, enabling them to offer annual percentage yields, or APYs, that are significantly higher than the national average.”

Revolut argues its model works as it incentivizes users to spend more with their accounts. Many so-called neobanks — like Monzo and Chime — have struggled over the years to convince users to use them as a primary account, instead having them as a backup to the main account that they have their salary paid into.

Founded in 2015, Revolut is Europe’s most valuable neobank, securing a $5.5 billion valuation earlier this year after a fresh round of funding. But it’s racked up heavy losses to achieve fast growth — the company posted a £106.5 million ($137.4 million) loss for its 2019 fiscal year, more than three times the £32.9 million it lost a year prior.

The firm launched in the U.S. in March — just as governments around the world began enforcing lockdowns to stem the spread of Covid-19 — and has since gained over 150,000 customers in the country. That’s nowhere near the millions of people that bank with major institutions like Citi and JPMorgan. It’s also way off Chime’s 8 million users and trails behind German rival N26’s 500,000.

Thu Oct 8 , 2020
Payments players are used to operating in an instant and real-time world, but few could have anticipated the crushing speed of the pandemic or its devastating toll. With economic life still disrupted by social distancing and lockdowns, most payments businesses will see revenue growth dip in the near term—although the […] 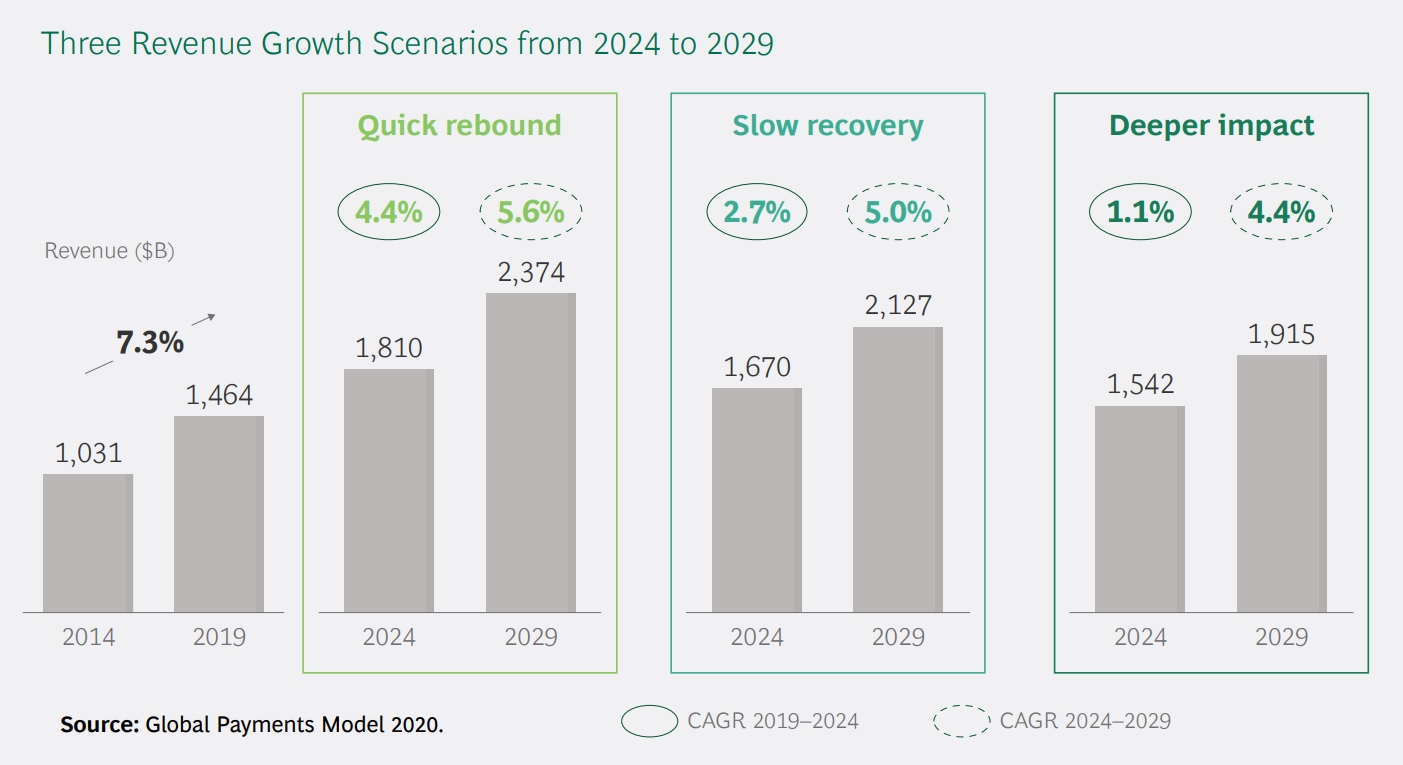