Stock futures moved lower in overnight trading, pointing to losses at the open on Thursday.

Dow futures fell 6 points, indicating an 82-point loss at the open. The S&P 500 and Nasdaq Composite were slated to open 0.4% and 0.7% lower, respectively.

Stocks surged on Wednesday, with the major averages spending the entire session in the green, fueled in part by Sen. Bernie Sanders dropping out of the presidential race, as well as hopes that the coronavirus outbreak may soon turn a corner.

Raymond James’ Washington policy strategist Ed Mills told CNBC that Sen. Sanders dropping out of the presidential race “removes the tail risk of some of his policies.” The health care sector, which Sanders had vowed to take on, advanced with the XLV, which tracks the sector, gaining more than 4%.

Some of the sectors that have been hit the hardest since the pandemic began — such as airlines, casinos and cruise lines — also led markets higher.

Stocks closed slightly lower on Tuesday, but jumped on Monday, bringing the Dow’s week-to-date gain to 11.3%. The S&P 500, meanwhile, has bounced 10.5% this week.

But some believe that stocks are now getting ahead of themselves and investors should exercise caution.

“I think this is kind of buy the rumor and potentially we sell the news when reality sets in of what we are going to see what’s on the other side,” billionaire investor Mark Cuban said Wednesday on CNBC’s “Closing Bell.” “I think people are naturally optimistic right now in terms of the market. I just don’t think they’re really factoring in what we’re going to see on the other side,” he added.

After Wednesday’s rally, the Dow is up 29% from its low and the Nasdaq Composite is down less than 10% this year.

“The stock market is at a very uncertain point now. The impact of the coronavirus on future earnings is yet to be determined. We aren’t out of the woods,” said Quadratic Capital chief investment officer Nancy Davis.

On Thursday the Street will be watching weekly jobless claims, which will be released at 8:30am ET. Economists are expecting an increase of 5 million, which would build on the record-shattering prior two readings of 6.6 million and 3.3 million.

Economists forecast that the unemployment rate will jump into the teens this month, from March’s 4.4% level and the 3.5% it was at in February.

Federal Reserve Chairman Jerome Powell is also set to speak on Thursday. His remarks follow the release of the minutes from the Federal Open Market Committee’s emergency meeting in March, which is when the central bank slashed interest rates to near zero.

The minutes revealed that the Fed is prepared to keep rates near zero until the economy has “weathered” the coronavirus impact.

“With regard to monetary policy beyond this meeting, these participants judged that it would be appropriate to maintain the target range for the federal funds rate at 0 to ¼ percent until policymakers were confident that the economy had weathered recent events and was on track to achieve the Committee’s maximum employment and price stability goals,” the statement said.

Wed Apr 8 , 2020
FILE PHOTO: A staff member wearing a protective face mask is seen at Starbucks, after the government announced the state of emergency for the capital following an outbreak of the coronavirus disease (COVID-19) in Tokyo, Japan April 8, 2020. REUTERS/Issei Kato (Reuters) – Starbucks Corp (SBUX.O) on Wednesday forecast a […] 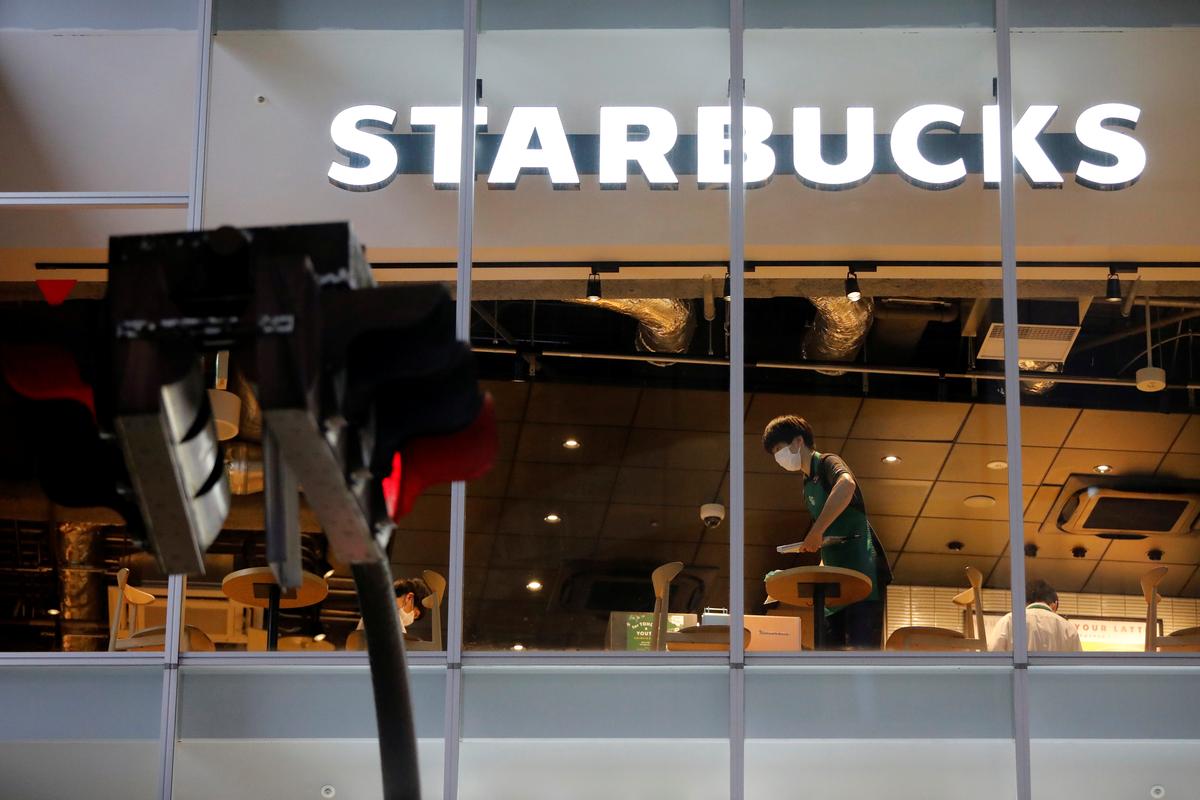