An employee double checks the contents of a customer order before sealing the package for shipment at the Jet.com fulfillment center in Kansas City, Kansas.

Four years ago, Walmart made a pricey bet on its e-commerce future. It paid $3.3 billion to buy Jet.com, an e-commerce startup that it hoped would attract younger, affluent and city-dwelling customers and help it fend off  Amazon’s rapid rise.

On Tuesday, Walmart announced it will discontinue Jet.com and phase out the brand.

Walmart CEO Doug McMillon said the company gained more than a name. On a call with analysts, he credited the acquisition for “jump-starting the progress we have made the last few years.” He pointed to Walmart’s curbside pickup, delivery to the home and expansion of categories beyond groceries, such as apparel and home decor.

“While the brand name may still be used in the future, our resources, people and financials have been dominated by the Walmart brand because it has so much traction,” he said. “We’re seeing the Walmart brand resonate regardless of income, geography or age.

McMillon said Walmart doesn’t “anticipate a significant accounting charge due to this decision.” He said most employees had been moved to roles tied to the Walmart brand.

In the years since Walmart bought Jet.com, it’s bought other digital natives, such as menswear company Bonobos, and birthed others like mattress brand, Allswell. It’s grown its curbside pickup and home delivery business. And it’s launched new online offerings, including Express Delivery, a new store-to-door service that delivers to customers’ homes in less than two hours.

Those investments have paid off as e-commerce growth. Last year, e-commerce sales grew by 37%. During the coronavirus pandemic, they shot up by 74% in the first quarter and attracted customers who tried its online services for the first time.

But Walmart’s e-commerce business has yet to turn a profit. It’s still trying to broaden its online sales beyond grocery. And Amazon has continued to be a tough rival.

Some initiatives have been costly flops. It bought, but then sold women’s apparel company, ModCloth. It shut down Jetblack, a high-end personal shopping service that catered to affluent families in New York City, in February. Through the members-only service, customers could order items by text, whether a bottle of champagne or box of diapers, and have them delivered on-demand. It was launched in 2018 and initially led by Rent the Runway co-founder Jenny Fleiss.

Lore said on Tuesday’s call that Walmart continues to expand its assortment of higher margin items, such as home decor and fashion, and add new brands, such as Ray-Ban, Keds and Champion. He said it will build upon its e-commerce gains during the pandemic.

“You’ll see online growing much more rapidly than we thought it would prior to this,” he said. “You’re going to see a lot of the brick and mortar retailers demonstrate to consumers that ‘Hey, it’s not just an Amazon world here online. We’re here as well.'”

Tue May 19 , 2020
PayPal has rolled out the ability to use a QR code to buy and sell goods in 28 markets around the globe. PayPal rolls out global QR code payment system From farmers markets to selling secondhand goods – the rollout of the QR code functionality in the PayPal app allows […] 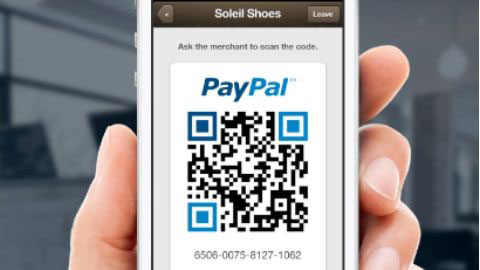