Khera is currently head of marine, Asia-Pacific at AXA XL, based in Singapore. In his new roles, he will be responsible for driving strategic, profitable expansion across the UK & Lloyd’s region and the division’s global hull books of business, according to a statement by the insurer.

In July, Khera will step down from his Asia-Pacific role and relocate to London.

Prior to joining the insurance industry, Khera held several senior management roles at Emirates Shipping Line and was master mariner and captain of several shipping vessels with Titan Ocean and BW Shipping. He has spent a total of 25 years in the marine industry.

“I’m delighted that Sundeep will be taking on responsibility for our London-based marine business,” said Peter Welton, CUO, marine, energy & aerospace, UK & Lloyd’s market at AXA XL. “As a former master mariner/captain in the field, Sundeep’s strength of leadership and depth of expertise will be key as we continue to serve our clients and support them in managing the risks they face today and in the future.”

Thu Apr 8 , 2021
The lease agreement, signed with the building’s owner PAG, is part of Manulife’s plans to grow its agency channel. Manulife will become one of the anchor tenants of ITT, occupying a total of four floors. Over the past years, Manulife Hong Kong has continuously grown its agency force, with 10,706 […] 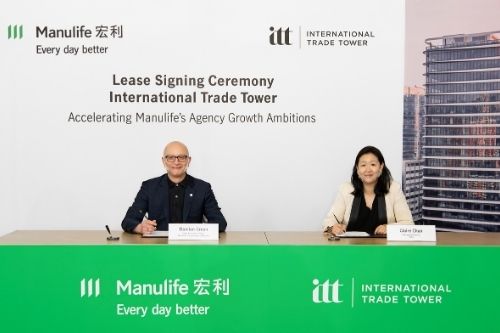