8:12 am: Trump lays out three-stage reopening of the country

President Donald Trump has issued a three-stage process for the economy to reopen slowly as the coronavirus recovery process begins. In an 18-page plan titled “Opening Up America Again,” the White House sees some states coming online before others. The first phase sees some companies open while vulnerable individuals continue to shelter in place and social distancing continues. The second envisions further loosening so long as there’s no evidence of a rebound in Covid-19 cases. Finally, the plan still calls for precautions for vulnerable individuals but a more aggressive return to normal for most aspects of the economy. — Cox

Futures contracts tied to the major U.S. stock indexes pointed to strong gains at the opening bell as investor optimism over the prospects of a Gilead Sciences drug treatment for the novel coronavirus ushered traders into equities. The Dow Jones Industrial Average was poised to soar some 740 points while S&P 500 futures suggested a pop of about 2.8%. — Franck

7:50 am: Remdesivir could give economy ‘fighting chance,’ Cramer says

CNBC’s Jim Cramer said on Twitter last night that remdisivir being effective in treating coronavirus would give the economy a “fighting chance.” “Every large S&P name is screaming but also the banks that are so hated…,” Cramer said in another tweet. “I think that remdesivir would cut the morbidity .. which would change how quickly we can open… and what we can do.” Cramer said in late March that investors who were betting the stock market would continue to fall long-term were “betting against science.” — Pound

7:47 am: Gilead rockets 12% in premarket trading on virus treatment hopes

Gilead Sciences soared more than 12% in the premarket session Friday after a report said that its drug remdesivir proved effective in treating the coronavirus. STAT news reported Thursday evening that a Chicago doctor treating those with the virus with the drug in a trial said her patients were recovering rapidly from severe symptoms. Though Gilead cautioned in a statement to Reuters that such anecdotal reports do not prove remdesivir’s efficacy, the company said more rigorous trials should show more certain results by the end of April. — Franck

China’s GDP contracted by 6.8% in the first quarter as coronavirus containment measures exacted a sharp economic hit. The decline was even worse than the 6.5% expectation, though economists generally cast doubt on China’s official figures. Industrial production fell 1.1%, which was better than estimates of 7.3%, while retail sales plunged 15.8% against a 10% forecast. Unemployment for the quarter stood at 5.9%, down from 6.2% amid efforts to gradually restart daily activities. However, continued weakness in demand shows that “even after the lockdowns have been lifted, people are cautious to consume,” Bo Zhuang, chief China economist at TS Lombard, told CNBC. — Cox

Shares of the consumer staples giant rose nearly 2% in premarket trading on Friday after reporting a 10% surge in U.S. sales in its quarterly earnings. Procter & Gamble said American sales got a boost from consumers stocking up on staples like toilet paper ahead of the coronavirus outbreak. The company earned $1.17 per share adjusted, compared to the Refinitiv estimate of $1.13 per share. However, the Vicks owner cut its revenue forecast for fiscal 2020, citing headwinds from foreign currency. — Fitzgerald

Shares of Boeing jumped more than 9% in Friday’s premarket trading after the company said it plans to resume commercial aircraft production at its Seattle-area plant as early as Monday. The company is implementing new physical distancing measures to avoid the spread of Covid-19. About 27,000 employees will be returning to work, equal to around 17% of the company’s workforce. The stock is down 58% this year. — Stevens, Josephs

Goldman Sachs on Friday downgraded shares of Apple to sell from neutral and said it sees slowing iPhone demand as users hang on to phones longer. “We are now modeling a deeper reduction in unit demand through mid 2020 and then a shallower recovery into early 2021. We also assume some lingering [average selling price] weakness as consumers look to economize similar to what we have seen in prior downturns,” Goldman analyst Rod Hall told clients. The firm said consumer demand may not return till late 2021 and that it would feel more bullish with evidence it would return sooner. Goldman lowered its price target on the stock to $233 from $250, representing a near 20% drop from Thursday’s closing price of  $286.69 a share. — Fitzgerald

Fri Apr 17 , 2020
LONDON (Reuters) – At least eight European hedge funds are launching portfolios betting on a recovery in corporate debt and emerging markets after the coronavirus pandemic triggered the biggest market rout in a generation. FILE PHOTO: A view of a nearly deserted Broad street and the New York Stock Exchange […] 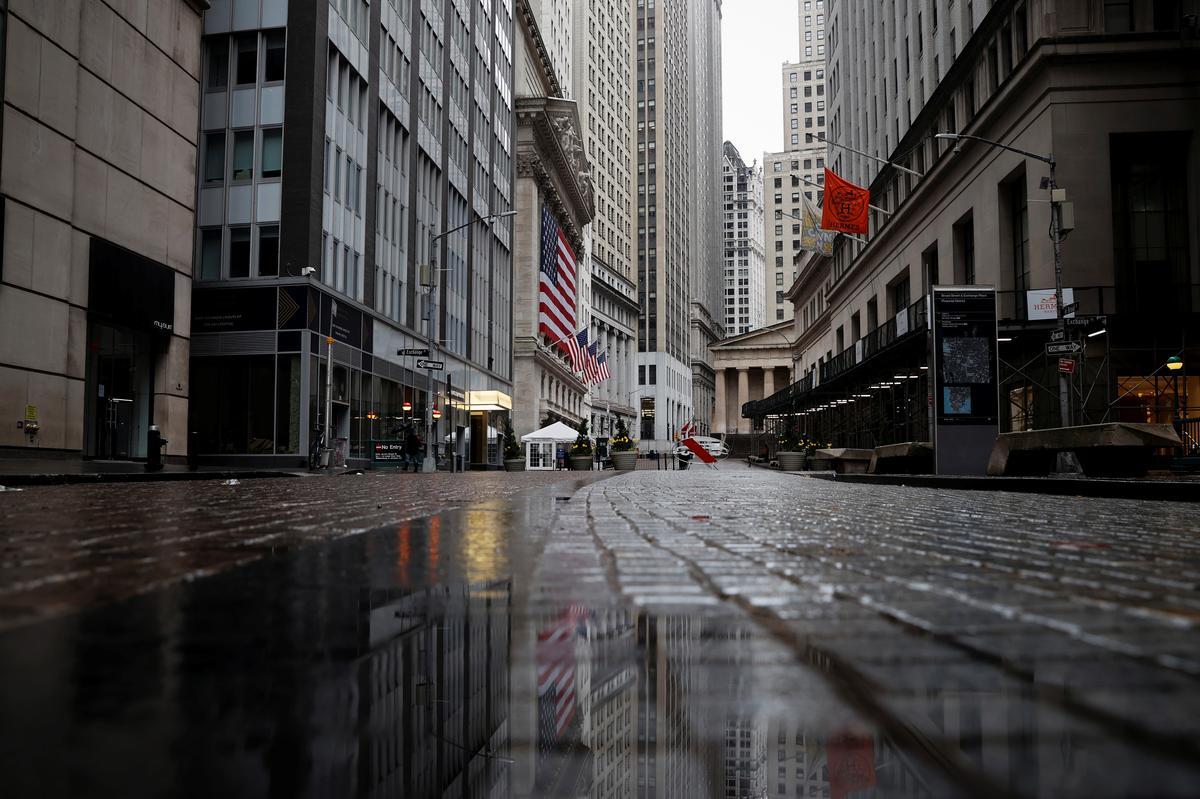