The trade body is of the view that coverage for solicitors could become unsustainable if underwriters are not allowed to cancel policies where the premium is not paid.

According to the association, it has been – and will continue to be – engaged with the Solicitors Regulation Authority (SRA) on insurers’ increasing concerns on the non-payment of premium and policy excesses as well as the availability of continued, non-cancellable cover.

It was noted that the IUA, in an effort to avoid potential market disruption, approached the SRA to propose revisions to the minimum terms and conditions (MTCs).

The proposals include allowing the policy to be cancellable in the event of premium non-payment; allowing the payment of run-off premium to be compulsory for such cover to incept; and allowing excesses payment to be made mandatory and, where not complied with, that excesses be offset against claims compensation.

However, while acknowledging that amending the MTCs can take time, the IUA lamented that there has been limited progress made in relation to the needed change. For the forthcoming renewals, then, it is expected that insurers will become more selective in the risks they accept while imposing tighter restrictions on premium payment terms.

“Many solicitor firms are facing economic pressures,” said IUA legal and market services director Chris Jones, “and we have already seen an increase in requests for payment of premiums by instalments.

“Insurers have shown their willingness to work with other professions that are struggling to mitigate the short-term economic effects of COVID-19, but the complete lack of any protection around payment of premium and excesses makes it far more difficult to do this for solicitors.”

Meanwhile, the IUA also believes that the reporting process for non-payment has not led to tangible improvements for insurers.

In its open letter to the legal industry, the representative body wrote: “The SRA is undertaking a number of measures to mitigate the non-payment issue in the short term, for example reviewing their supervision and enforcement processes and effective communications with regulated firms.

“These steps are welcomed but will do little to address the core concerns of insurers and the likely effect of those concerns at forthcoming renewals.”

As of this writing, the SRA has not released a response to the IUA’s letter published on September 02.

“We understand the difficulties facing many firms at this time,” the insurance association went on to state. “Our continuing goal is to ensure that there is sufficient and affordable PII capacity available for regulated firms at a time when it needs it most.

“We will continue our engagement with the SRA but, regretfully, meaningful change will not be in place before October and the implications of this will be seen in due course.”

Is now the time for QR code payments at the POS?

Thu Sep 3 , 2020
Globally, digital payments are expected to reach an annual transaction value of $4.4 trillion in 2020, with 17% CAGR through 2024.* With growth rates like this, it is not surprising that merchant payments, such as QR code payments, have captured the interest of many stakeholders, including mobile money providers (MMPs). […] 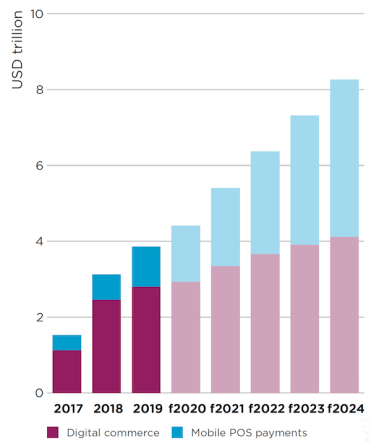