(Reuters) – Sad piano chords, somber shots of empty streets and close-ups of people staring out their windows. So prevalent were coronavirus-themed ads that followed a similar template just a few weeks ago, they were parodied in a YouTube compilation video: “Every COVID-19 Commercial is Exactly the Same.”

While the ads were meant to convey solidarity with those sacrificing and suffering, advertisers are finally lightening up.

In another ad here, Diageo’s (DGE.L) Smirnoff poked fun at its own poorly timed big splashy marketing campaign featuring TV stars at outdoor summer parties, telling viewers the country needs them to change their summer plans because “home is where the puzzles are.”

As the United States prepares to lift shelter-in-place orders and restart businesses, advertisers are shifting marketing messages to reflect a new mood. Somber and empathetic have given way to a more lighthearted approach.

“We’re making sure we’re in tune with the climate of where we are on this curve,” Monica Rustgi, vice president of marketing at Budweiser, said in an interview.

While it is too early to declare a recovery, marketers in sectors such as banking and technology are preparing for the possibility as early as the second half of the third quarter. Advertising spending usually follows, Michael Roth, chief executive of advertising holding company Interpublic Group of Companies Inc (IPG.N), told Reuters.

“The most significant factor is the sector they’re in,” Roth said, regarding the timing of a rebound for various clients.

For airlines, among the hardest hit industries, “it’s hard to see them spending a lot in the second half of the third quarter.”

Clients have been changing their minds almost daily in response to the pandemic, Roth said during IPG’s earnings call.

Jon Williams, chief executive of The Liberty Guild, a network of advertising and marketing strategists, said he also believes clients will ramp up their marketing plans toward the end of the third quarter.

“The clients that we are working for are working towards the end of the summer,” he said.

Even if brands have not committed to advertising budgets yet, almost all are thinking ahead to what those future ads should convey. Hard-hit brands such as casual dining restaurants are the ones planning the most for the reopening of businesses, said Emma Montgomery, global co-chief strategy officer at creative ad agency TBWA Worldwide, a unit of Omnicom Group (OMC.N).

“They really need to be fast once (recovery) starts,” she said.

Getting customers jazzed up to return to restaurants and making purchases again will require a different style.

“I can feel the shift in the work we’re doing for the rest of the year, shifting from stay home messaging to ‘go forth’ messaging,” he said.

Predicting what life will look like after months of self-isolation will be tricky for marketers.

Even humorous ads like Budweiser’s “Whassup,” reboot is underpinned by a message of staying connected through difficult times. It ends by displaying a Salvation Army hotline number for people who need someone to talk to.

“Something as simple as a hello, or in this case ‘whassup,’ means a lot in times like today,” Rustgi said.

Travel and hospitality brands, for example, are walking the fine line of urging people to pursue getaways after months at home, but also reassuring them that it will be safe, Marobella said.

Hilton Worldwide (HLT.N) said last week it would partner with cleaning brand Lysol and consult with the Mayo Clinic to create a cleaning and disinfecting standard for its hotels worldwide.

A gradual return to normalcy, conveyed through ads that celebrate holidays and milestones will help, Montgomery said.

“Celebrate Mother’s Day together, even if you’re apart,” a narrator says in a new ad from jewelry line Pandora featuring a son in a video call with his mom as she opens his gift of a silver bracelet.

But nothing can convey a change in tone and that the worst is behind us like humor, marketers said.

In a commercial for hearing aid company Eargo, a daughter repeatedly whispers a private message to her young husband in the family kitchen that he is just not getting, when her father, wearing his Eargo hearing aids, blurts out, “Condoms, Charlie. She wants to know if you brought any condoms.”

The company offers free remote hearing checks and consultations, according to the ad.

Mon May 4 , 2020
FILE PHOTO: An Uber Eats delivery person rides a bicycle during an outbreak of the coronavirus disease (COVID-19), at Shibuya shopping and amusement district in Tokyo, Japan April 8, 2020. REUTERS/Issei Kato LONDON (Reuters) – Uber (UBER.N) said on Monday it was closing down its Uber Eats operations in eight […] 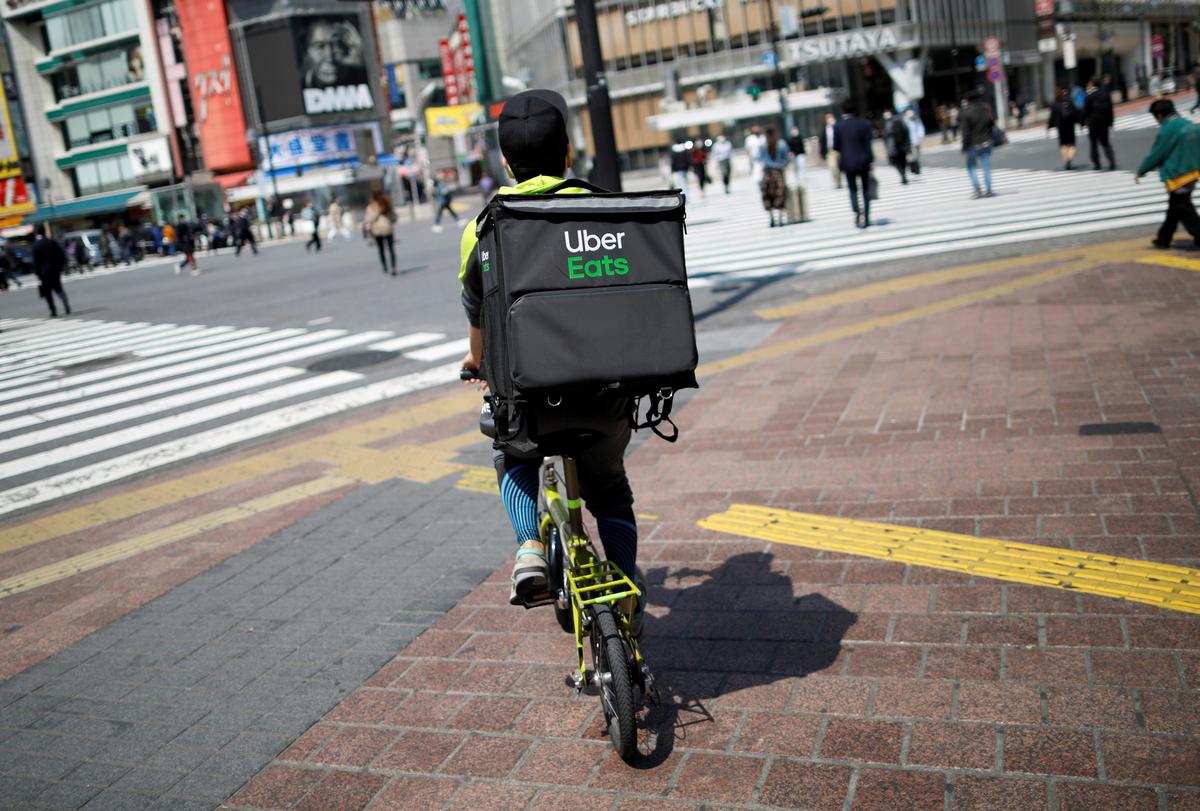