NEW YORK (Reuters) – Wall Street fell on Tuesday, as a drop in oil prices steepened in the latter stages of the session and erased early gains built on tentative signs that coronavirus outbreaks in some of the biggest U.S. hot spots may be leveling.

The S&P initially appeared poise to add to a 7% jump on Monday, after health officials said the pandemic may kill fewer Americans than indicated in recent projections. Governor Andrew Cuomo said New York, the epicenter of the virus in the United States, was nearing a plateau in the number of patients hospitalized.

“The market sees some hint of good news in terms of the virus. We know we’ve got the Fed and a lot of stimulus, fiscal stimulus coming,” said Scott Wren, senior global market strategist at Wells Fargo Investment Institute in St. Louis, Missouri.

Energy and materials were the best performing sectors, with an aggressive round of U.S. fiscal and monetary stimulus in the past month helping to boost risk appetite for the majority of the session.

Still, a decline in oil prices steepened, as U.S. crude settled down more than 9% as supplies swell and investors tempered expectations for a quick agreement on output cuts between major producers. Investors also braced for worsening economic data and corporate earnings in the coming weeks.

“Oil is important because about 20% of the high yield bond market is energy. The energy sector has tens of thousands of high paying jobs and there’s a lot of capital expenditure that happens in the sector too,” said Wren.

The S&P 500 is up 18.9% from its March 23 intraday low, but remains 21.5% below its mid-February record high as methods designed to contain the virus quashed demand across a swath of industries such as airlines, automakers and hotels.

Wall Street’s fear gauge has steadily retreated from 12-year peaks in recent days, but volatility is expected to remain elevated as companies prepare to report an expected slide in first-quarter earnings and outline more drastic plans to bolster cash reserves.

Exxon Mobil throttled back a multi-year investment spree in shale, LNG and deep water oil production, saying it would cut planned capital spending this year by 30% as the pandemic saps energy demand.

Oilfield services firm Halliburton Co said it would cut about 350 jobs in Oklahoma and that its executives would reduce their salaries.

FILE PHOTO: A nearly deserted Wall Street and the steps of Federal Hall are seen in lower Manhattan during the outbreak of the coronavirus disease (COVID-19) in New York City, New York, U.S., April 3, 2020. REUTERS/Mike Segar

Advancing issues outnumbered declining ones on the NYSE by a 2.71-to-1 ratio; on Nasdaq, a 1.30-to-1 ratio favored advancers.

Volume on U.S. exchanges was 13.92 billion shares, compared to the 15.42 billion average for the full session over the last 20 trading days.

Tue Apr 7 , 2020
(Reuters) – Amazon.com Inc is testing the use of disinfectant fog at a warehouse in Staten Island, New York starting on Tuesday, the company told Reuters, following worker protests over the risk of coronavirus infection at the site. FILE PHOTO: Protesters are seen at Amazon building during the outbreak of […] 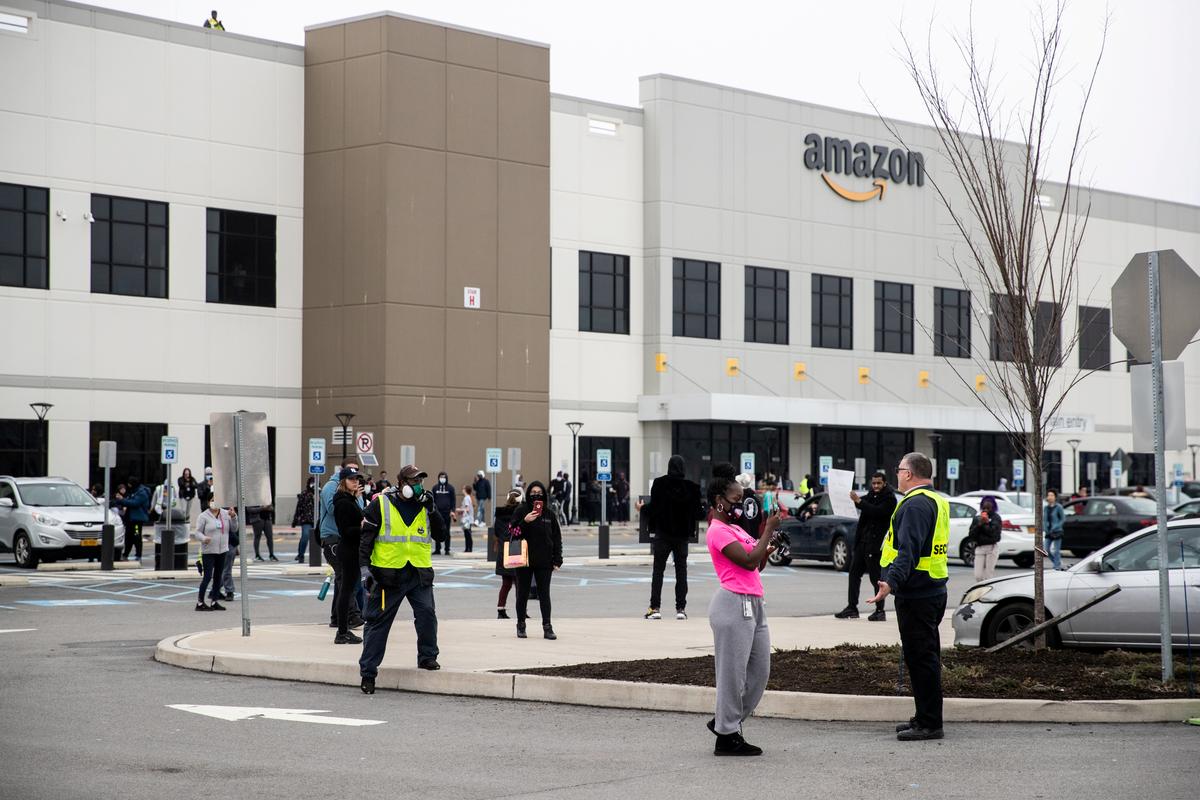