(Reuters) – Pfizer Inc (PFE.N) said on Friday it is in talks to shift more of its medicine production to outside contractors as it prepares for large-scale production of an experimental vaccine to prevent COVID-19, should it prove safe and effective.

The U.S. drugmaker is tapping its network of around 200 outside contractors, which includes Catalent Inc (CTLT.N), Lonza Group AG (LONN.S), and Thermo Fisher Scientific Inc (TMO.N), to play a bigger role in producing some of its existing medicines, Mike McDermott, president of global supply at Pfizer, told Reuters in an interview.

Pfizer did not specify which companies within its network it is in active discussions with about shifting production.

That will help Pfizer shift a portion of production at four of its vaccine manufacturing facilities, including one of its largest U.S. factories, toward the coronavirus vaccine while preventing disruptions in supply of its other products, he said.

“They have been hugely helpful in the past and will help us through this,” McDermott said.

Pfizer and German partner BioNTech SE (22UAy.F) said on Tuesday they have begun delivering doses of their coronavirus vaccine candidates for initial human testing in the United States. Trials in Germany had already begun.

If successful, Pfizer said it hopes to receive emergency use authorization from the U.S. Food and Drug Administration as early as October. It could distribute up to 20 million doses by the end of 2020, and potentially hundreds of millions next year, it said.

The shift to outside production of other medicines will primarily effect vaccines and intravenous drugs. Pfizer currently produces around 1.5 billion doses of intravenously injected vaccines and drugs each year.

McDermott said Pfizer will also add additional shifts to its own factories, hire more workers to take advantage of its unused production capacity, and stockpile current products in preparation for the shift to COVID-19 vaccine production.

Pfizer said earlier this week it was preparing four of its manufacturing sites – three in the United States and one in Belgium – to produce the vaccine, even before clinical trials shows which, if any, of the four potential candidates being tested demonstrates efficacy in preventing infection with the novel coronavirus.

It will cost Pfizer at least $150 million to gear up its facilities for the new vaccine, McDermott said.

Pfizer and BioNTech’s vaccine candidates use messenger RNA (mRNA) technology, which has long been talked about but has yet to produce an approved product. The mRNA technology instructs cells in the body to make specific coronavirus proteins that then produce an immune response.

It has the potential to be among the first vaccines against the virus that has infected more than 1 million people in the United States and killed over 77,000.

Producing vast quantities of vaccines requires that Pfizer and BioNTech work to rapidly scale up their suppliers’ ability to make raw materials for mRNA vaccines, McDermott said, adding that many are small biotechs.

It could also face potential shortages of more basic materials, he added, such as the vials and syringes used to contain and administer vaccines.

Those materials “could become stressed in this environment, where you are trying to produce your … existing products and add in vaccines needed for hundreds of millions or billions of people,” McDermott said.

Contract manufacturers Lonza and Catalent are also working with other drugmakers to help produce potential treatments and vaccines for the coronavirus.

Last week, Lonza said it was working with Moderna Inc (MRNA.O) to help it produce its experimental mRNA vaccine being developed with U.S. government backing.

Lonza, Catalent and Thermo Fisher did not immediately respond to requests for comment about their work with Pfizer.

Pfizer also operates its own contract manufacturer, CenterOne, which provides raw materials to other drugmakers.

Reporting by Carl O’Donnell in New York and Michael Erman in Maplewood, N.J.; Editing by Bill Berkrot and Daniel Wallis

Trump 'torn' over U.S.-China trade deal as officials push to fulfill its terms

Sat May 9 , 2020
WASHINGTON/BEIJING (Reuters) – U.S. President Donald Trump said on Friday he was “very torn” about whether to end the so-called Phase 1 U.S.-China trade deal, just hours after top trade officials from both countries pledged to press ahead with implementing it despite coronavirus economic wreckage. FILE PHOTO: China’s Vice Premier […] 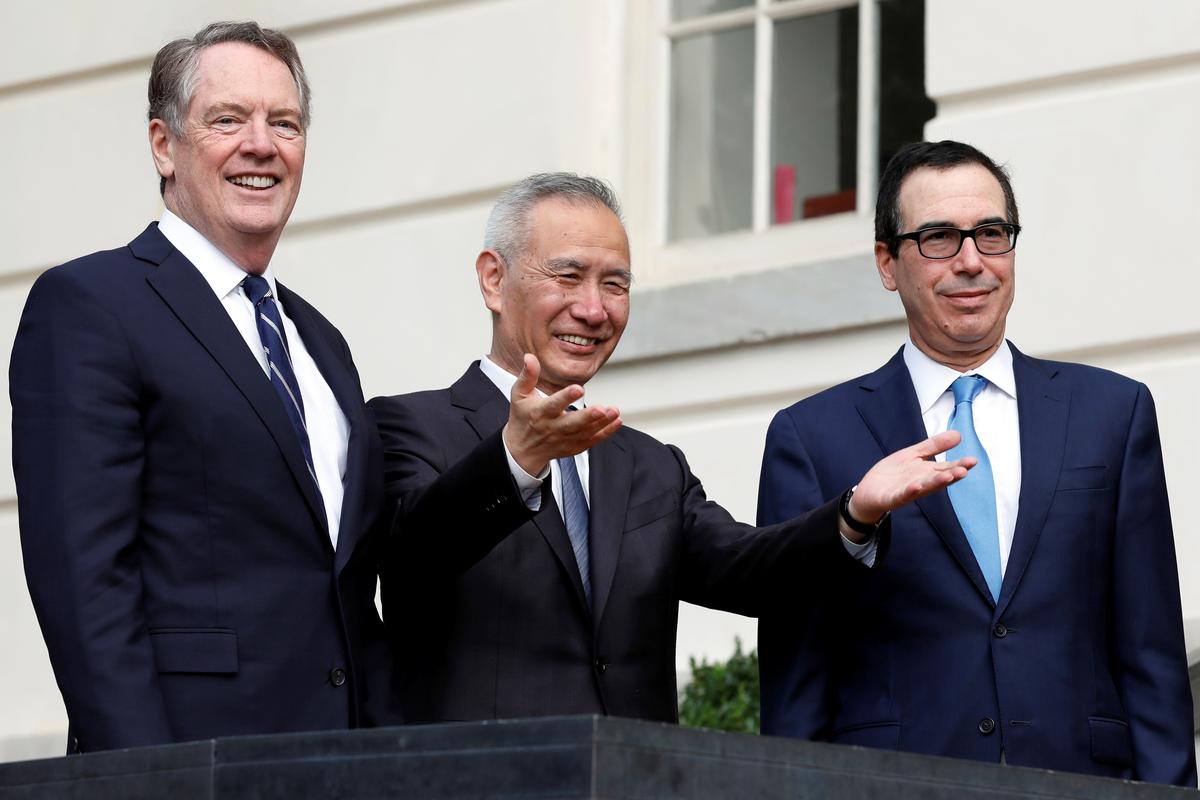