(Reuters) – Tesla Inc and officials in California have resolved their acrimonious clash over safety procedures at the automaker’s sole U.S. assembly plant with a deal that allows production to resume as early as Monday, county officials said.

The county said the automaker could take additional steps ahead of next week after Chief Executive Elon Musk had vowed to defy authorities, saying Monday he was resuming production despite the prohibition. On Tuesday, he also won the backing of President Donald Trump.

In a tweet, Alameda County said that following talks with Tesla it agreed that the electric carmaker can take steps “in preparation for possible reopening as soon as next week.”

Tesla did not immediately comment Wednesday but around the same time the county issued its statement, Musk tweeted: “Life should be lived.”

Tesla’s sole U.S. electric vehicle assembly plant is in Fremont, California, which is in Alameda County.

The county said it would work with police in Fremont “to verify Tesla is adhering to physical distancing and that agreed upon health and safety measures are in place for the safety of their workers as they prepare for full production.”

On Monday, Musk said production was resuming in Fremont, defying an order to stay closed and saying if anyone had to be arrested, it should be him.

On Tuesday, Musk won Trump’s backing. “California should let Tesla & @elonmusk open the plant, NOW. It can be done Fast & Safely!” Trump wrote on Twitter. The White House did not immediately comment on the announcement.

California Attorney General Xavier Becerra told CNBC that “conversation is going on between Tesla and the county. But at the state level, we’re ready to enforce if we find that anyone is violating the state orders issued by the governor.”

On Tuesday, employee parking lots at Tesla’s factory in Fremont, California, were packed with cars. Trucks could be seen driving in and out of the factory grounds.

At the Fremont factory’s outbound logistics parking lot, where only a dozen Tesla cars were parked last week, hundreds of Tesla vehicles were seen on Tuesday.

The company had sued Alameda County challenging its decision that the plant should stay closed.

A county health official on Friday said the county had asked all manufacturers, including Tesla, to delay operations by at least another week to monitor infection and hospitalization rates.

Tesla on Saturday released a plan to keep workers returning to the factory safe.

The measures, which include temperature screenings, the installation of barriers to separate work areas and protective equipment for workers, are similar to those set up by Detroit-based automakers General Motors, Ford and Fiat Chrysler. Those automakers are set to resume at most U.S. auto plants starting Monday.

Trump is eager for the U.S. economy to reopen and for Americans to return to work.

Musk over the weekend threatened to leave California for Texas or Nevada over his factory’s closure. His move has highlighted the competition for jobs and ignited a rush to woo the billionaire executive by states that have reopened their economies more quickly in response to encouragement from Trump.

Last month, Musk was on a call with Trump and other chief executives to discuss the reopening of the U.S. economy in which Musk said he wanted to be able to resume production by May 1 or earlier, a person briefed on the call confirmed. Details of the call were reported earlier by the Washington Post.

FILE PHOTO: A Tesla logo on a Model S is photographed inside of a Tesla dealership in New York, U.S., April 29, 2016. REUTERS/Lucas Jackson

Musk’s fight with local authorities has gotten the attention of those who scout sites for new factories and corporate offices, as well as economic development officials hungry for more jobs.

Since the disagreement between Tesla and Alameda County gained national attention, officials from such states as Texas, Nevada, Georgia, Utah and Oklahoma have pitched Musk about considering their state. Analysts estimate it would take Tesla 12 to 18 months to move production.

The Fremont factory employs more than 10,000 people, according to the automaker.

Wed May 13 , 2020
Signage is seen on a shopping cart inside a J.C. Penney Co. store in Peoria, Illinois. Daniel Acker | Bloomberg | Getty Images Check out the companies making headlines in midday trading.  Coty — The cosmetics company continued its slide following its dismal earnings on Monday. Coty — the biggest […] 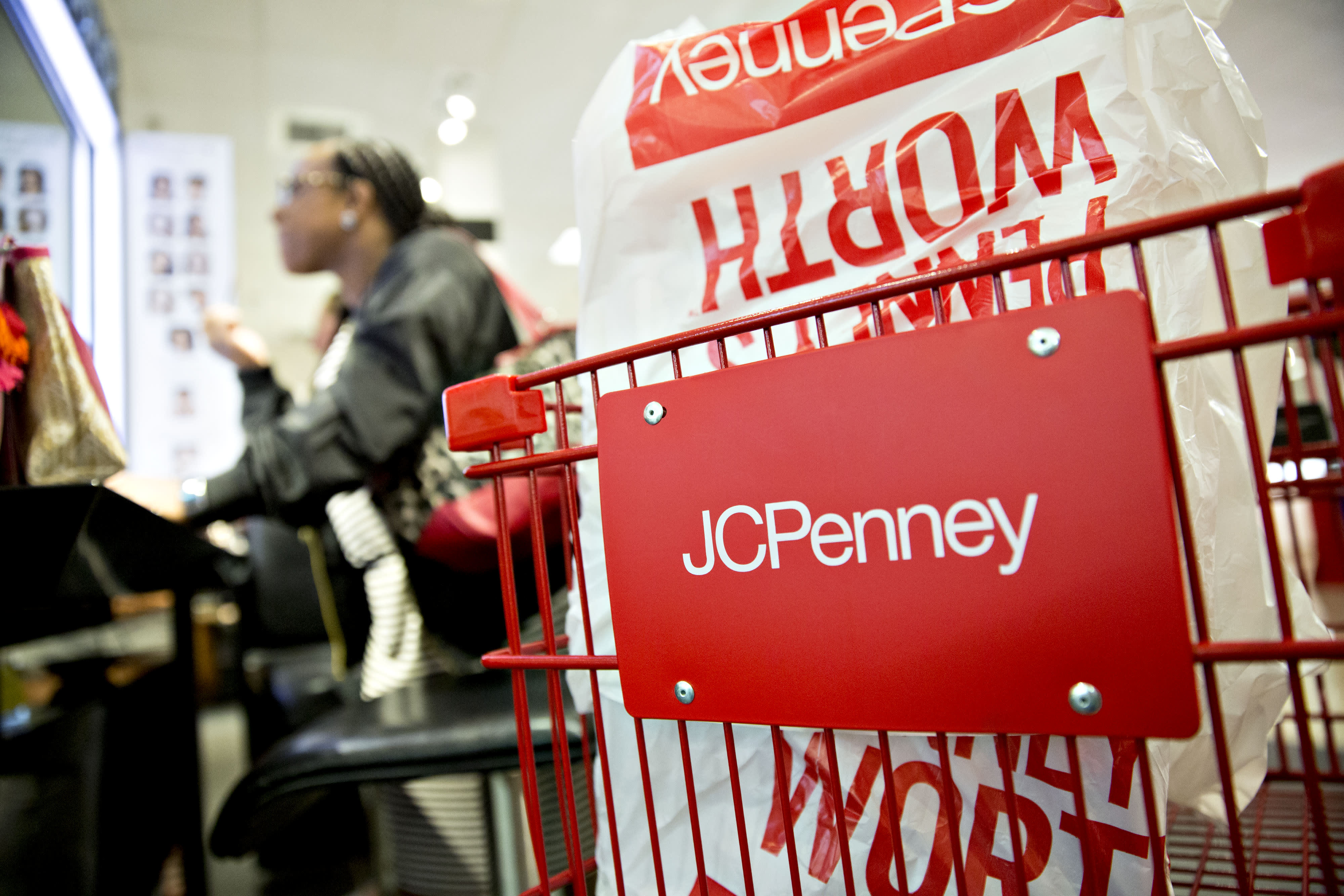