An employee assembles an excavator at the Caterpillar Inc. manufacturing facility in Victoria, Texas.

Caterpillar — Shares of the manufacturing company dropped more than 8% after Bank of America downgraded the stock to underperform from neutral. The bank said in a note that the hit to the energy and mining sectors from the coronavirus would be a drag on Caterpillar’s revenues and that earnings estimates for 2020 are likely 10% to 15% too high for the company.

SCWorx — The health information company rocketed more than 225% on Monday after the company said a health-care network has agreed to purchase some 48 million COVID-19 rapid testing kits over the next several weeks. The tests, purchased by Rethink My Healthcare, analyze blood for the presence of COVID-19 antibodies. “Widespread testing for COVID-19 disease in the United States is absolutely critical for saving lives and reopening our economy,” Marc Schessel, CEO of SCWorx, said in a press release.

Ford Motor —  Ford shares dropped more than 5% after the automaker warned that the economic fallout from the coronavirus has significantly impacted its first-quarter performance. Ford said total revenue for the first quarter is expected to be about $34 billion, down from $40.3 billion a year ago.

Delta, United, American Airlines — Airline shares fell broadly after Fitch downgraded Delta’s debt  to BB+ from BBB-. “Though Delta remains a stronger credit than its network peers, debt raised to sustain liquidity through the pandemic will drive credit metrics outside of a range supportive of investment-grade ratings at least through 2021,” according to Fitch. Delta and American dropped more than 6% each while United traded 7.5% lower.

Norwegian Cruise Line, Royal Caribbean, Carnival — Cruise line stocks fell after the Centers for Disease Control and Prevention extended a no-sail order for cruises. Norwegian fell more than 13% along with Royal Caribbean while Carnival slid 8%. The measures we are taking today to stop the spread of COVID-19 are necessary to protect Americans,” said CDC Director Robert Redfield in a release.

Palo Alto Networks — Shares of the cybersecurity company rose more than 1% after Rosenblatt upgraded the stock to a buy rating and raised its target to $225. “In our view, the company is currently benefiting from the current work-from-home (WFH) trend,” analyst Yun Kim said. The firm’s new target is about 25% above where the stock currently trades.

AMC Entertainment — AMC Entertainment tanked more than 15% after the New York Post reported the movie theater chain is inching towards a bankruptcy filing. AMC is in talks to hire law firm Weil Gotschal & Manges to explore a potential Chapter 11 filing after shuttering its cinemas nationwide due to the coronavirus pandemic, the Post reported. The stock has plunged 70% this year.

Liberty Formula One — The entertainment stock dropped more than 5% on Monday morning after Morgan Stanley downgraded the company to equal weight from overweight. The firm’s analysts said in a note that the coronavirus pandemic could hurt Formula One’s 2021 season. “We have to at least consider in our bear case the risk that there are real limitations to holding mass gatherings such as sporting events until a vaccine is widely available sometime in 2021,” the note said.

Facebook — Facebook dipped more than 2% after The Wall Street Journal reported the social media giant’s ad rates fell up to 25% in March compared to February.

Boeing — A source told CNBC that Boeing is looking into cutting its payroll by up to 10%. Boeing shares dipped more than 2%.

Mon Apr 13 , 2020
NEW YORK (Reuters) – Athene Holding Ltd (ATH.N) agreed on Monday to pay a $45 million civil fine to settle charges it conducted insurance business in New York without a license, the first settlement in a probe into an industry where life insurers take over corporate pension plans. FILE PHOTO: […] 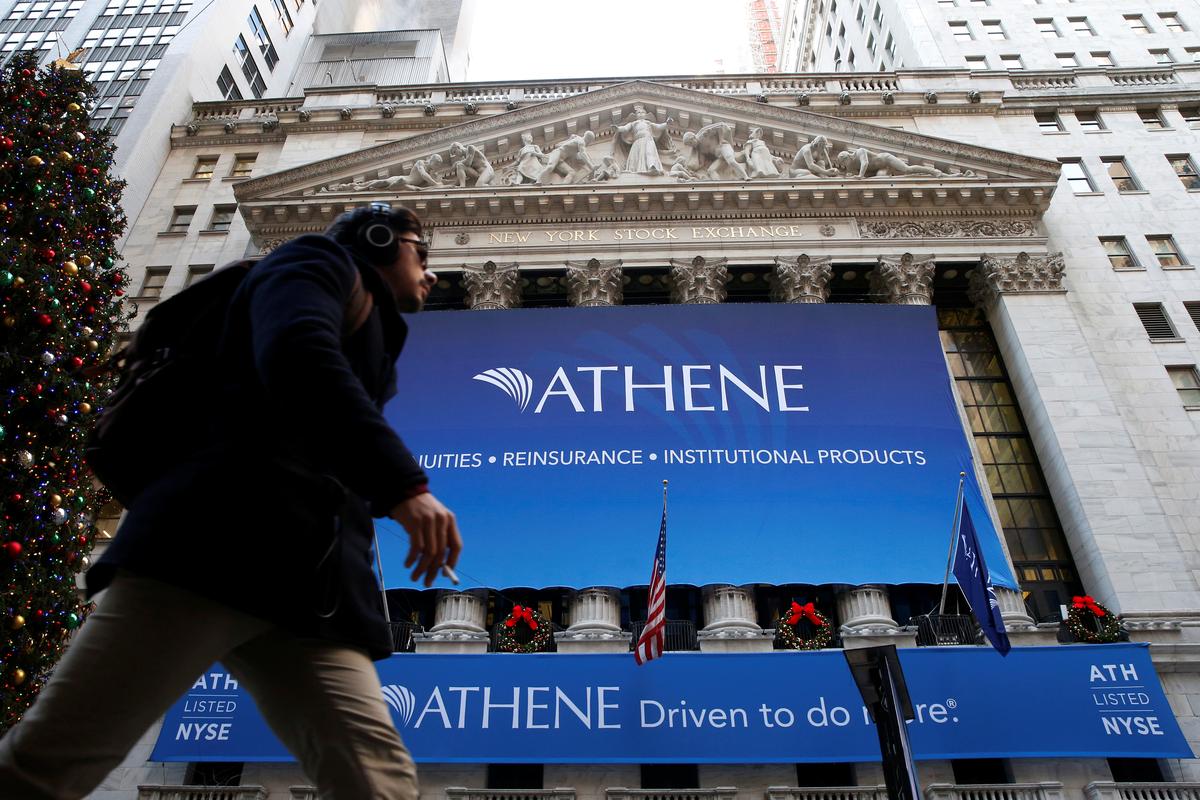